From December 3rd at MAV in Herculaneum the pictures of the formidabil monte, the inexhaustible source of inspirations for artists and photographers but also the ruthless host of the people living on its slopes.

A curse and a blessing over the Gulf of Naples, the sterminator Vesevo (Vesuvius, the destroyer ) celebrated by Leopardi is at the core of Neapolitan oleography , boasting the most portrayed plume on the planet; but it is also the generator of tragedies with its eruptions that since 79 AD have been spreading terror and death on its slopes. 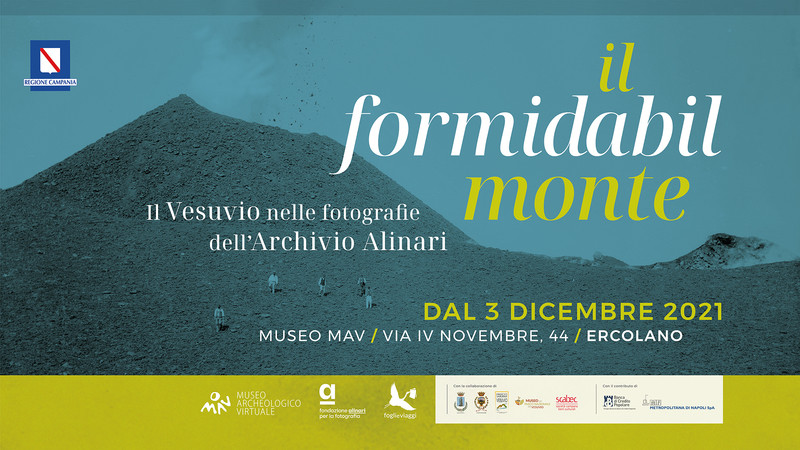 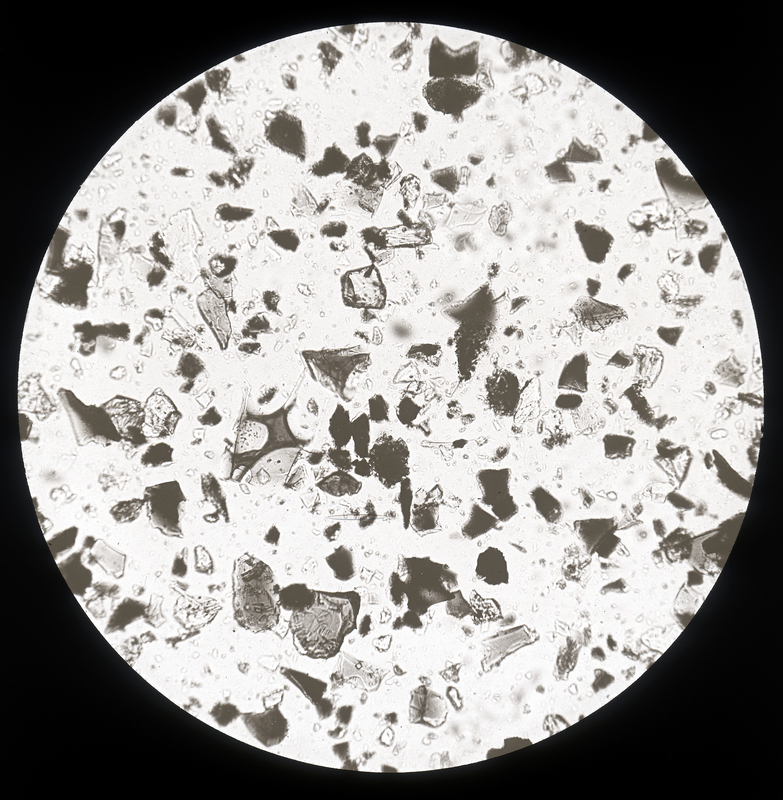 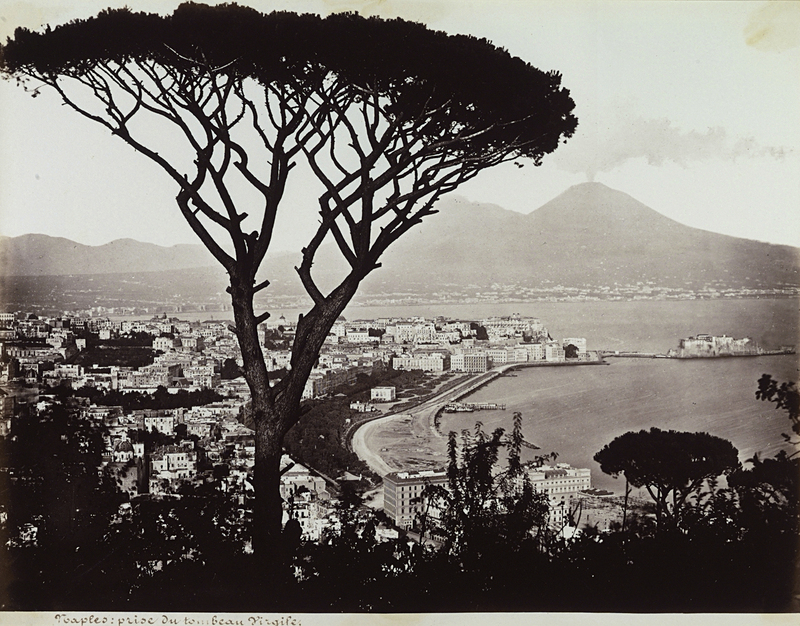 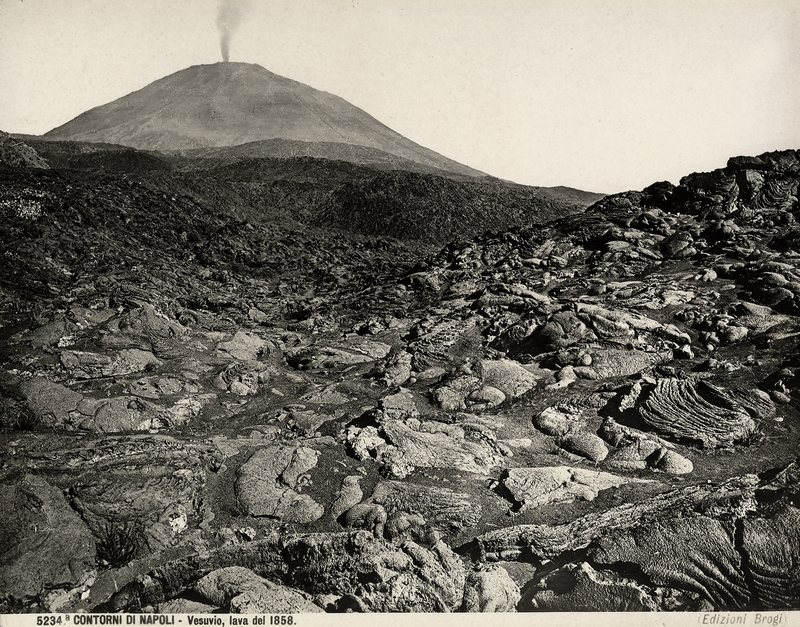 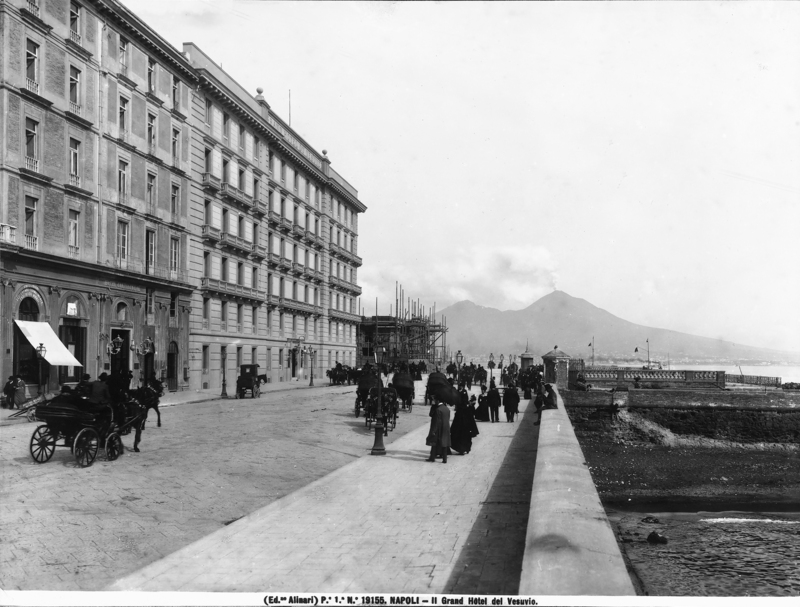 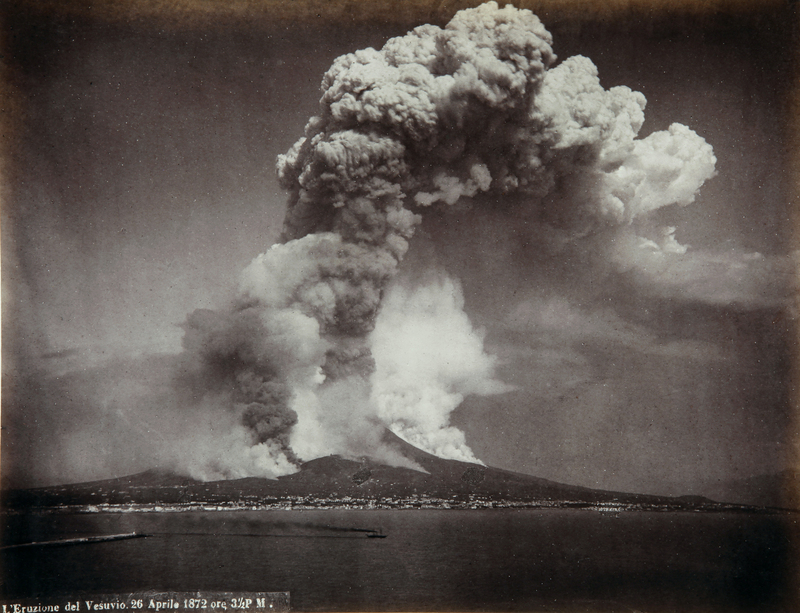 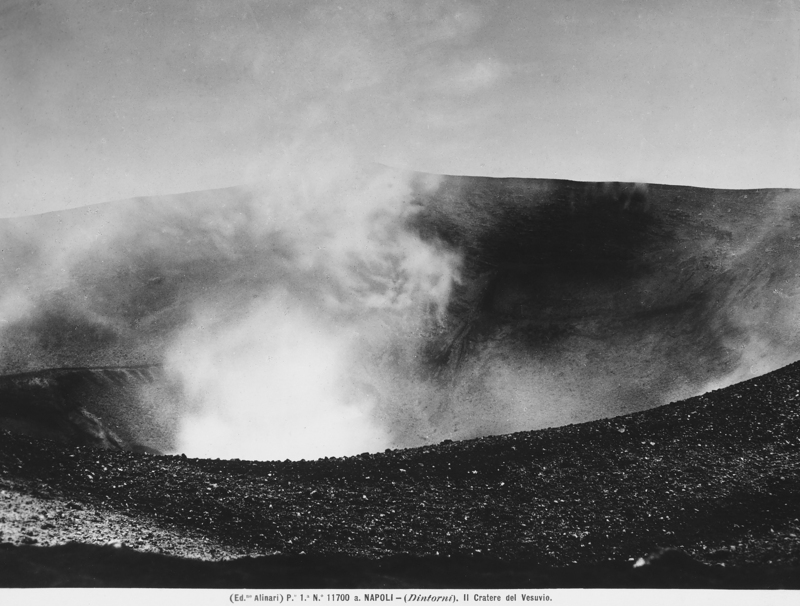 The exhibition consists of 58 photographs narrating the formidabil monte, the Vesuvian and Neapolitan region from the mid-nineteenth century to 1944.

This exploration of the formidabil monte shows cooling lava flows, casts of the victims of the 79 AD eruption, ladies with hats enjoying the exotic trip by sedan-chair to the rim of the crater, elegant gentlemen wearing top hats and waistcoats wandering around the fumaroles in search of literary inspiration; but also the terrorized faces of refugees fleeing their villages surrounded by lava. Ottaviano, Boscotrecase, San Sebastiano al Vesuvio, Somma Vesuviana, Torre del Greco: families carrying household goods on their back, walls of lava and ash blocking the streets, adults in dismay, children seized with fear.

The exhibition is composed of two sections . The first - "Between Grand Tour photography and experimentation" - is further divided into four subsections: "Lava", "Naples and Vesuvius", "Pompeii and Herculaneum" , "Vesuvian Walks". The second, titled "Eruptions", highlights the dramatic events that took place in 1872, 1895, 1905 and 1944, the latest of the volcano's awakenings, 77 years ago. 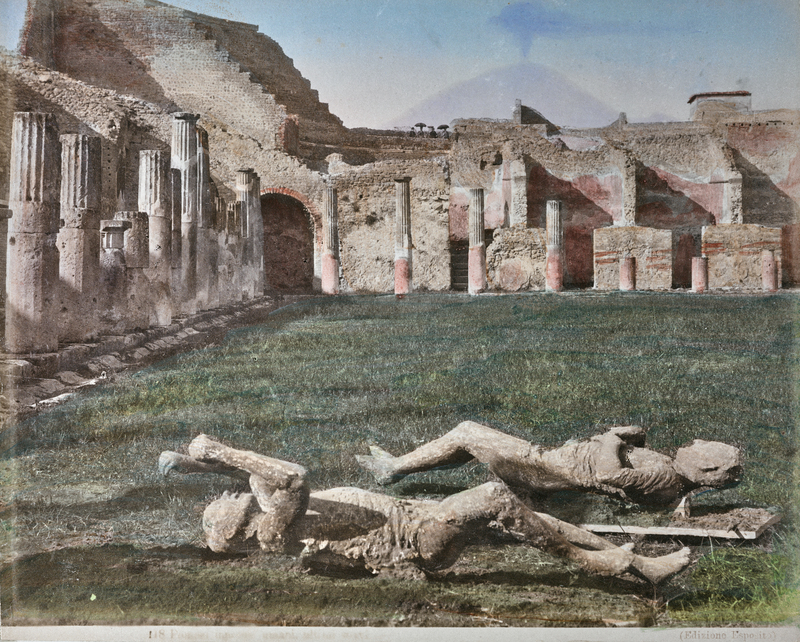 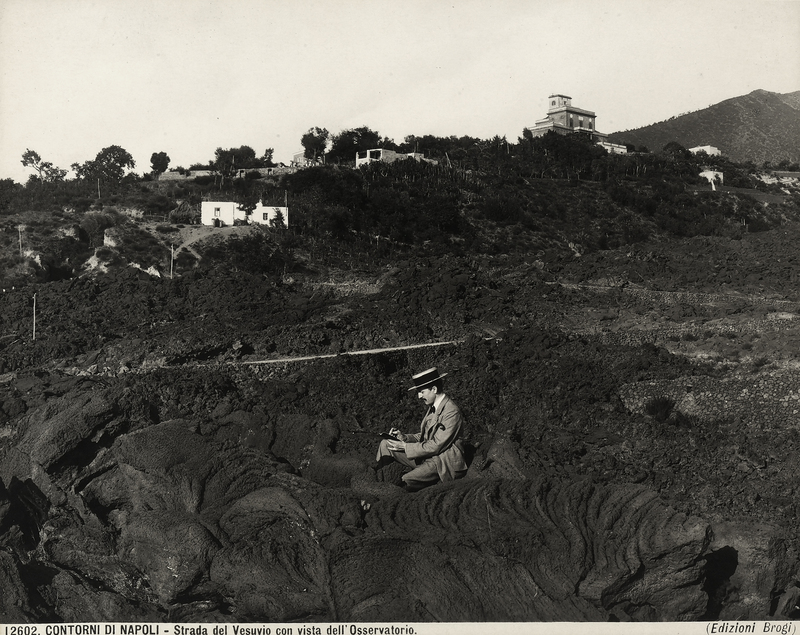 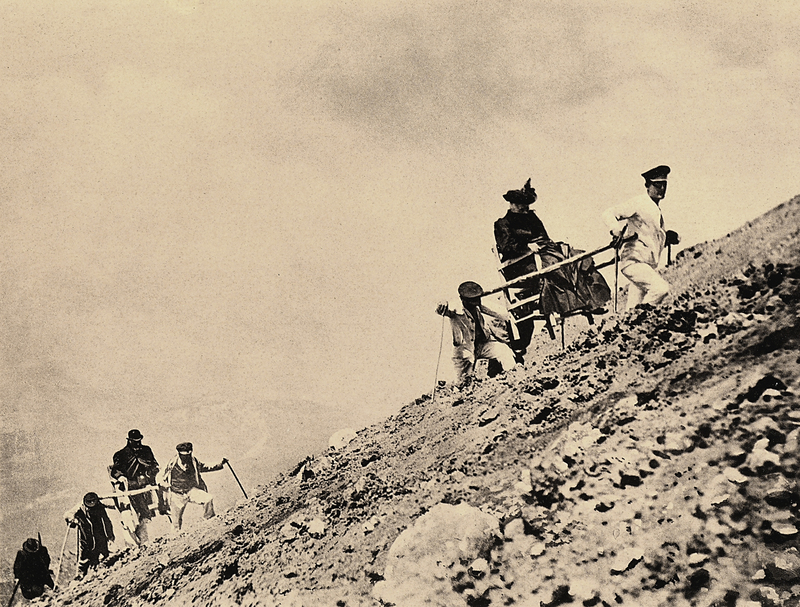 Frank Alvord Perret, Tourists during an excursion by sedan chair on the slopes of Vesuvius, 1906, collotype, 18x23 cm, from the "Vesuvius" album dedicated to R.V. Matteucci director of the Royal Vesuvian Observatory, Alinari Archives-album collection, Florence

The 18th century was “the golden age” of the Grand Tour to Naples, with the discovery of Pompeii and Herculaneum. The romantic and intellectual journey continued to be popular during the 19th century, the age of the picturesque and the sublime. Photographs very soon became some of the most demanded travel souvenirs and Il formidabil monte was a favorite subject: with wide views as its backdrop and its smoking plume or portrayed from ‘within ' with its powerful lava flows.

In Naples there was an extraordinary concentration of photographers, mostly foreigners and travellers themselves, who contributed to creating an iconography of Vesuvius still tied to pictorial models. A volcano ‘in a pose' to please tourists and travellers strolling around the Gulf, the Land of the Sun. In the meanwhile meticulous scientists such as Giorgio Roster investigated the lava dust.

The selection we propose captures some stages in the evolution of the photographic technique, such as the rare negative on paper by de Beaucorps, whose positive is here displayed , the hand-painted glass plates by Giorgio Roster and the photomechanical process adopted for the views of the excavations at Pompeii. Or the fascinating images taken from a precious album by James Graham dedicated to his sister.

With the 1872 eruption something changes. Vesuvius shows its ruthless face. The rubble take the whole framing, excluding the wide views from it. The photographers who used to take shots of the Grand Tour now turn their focus to current affairs, storytelling and event documentation.

The splendid postcard image of Southern Italy is gradually replaced by a new iconography. We find its echo in diverse artistic languages at different moments in time, such as the Vesuvius series by Andy Warhol which makes reference , among other sources, to Giorgio Sommer's photograph of the 1872 eruption. 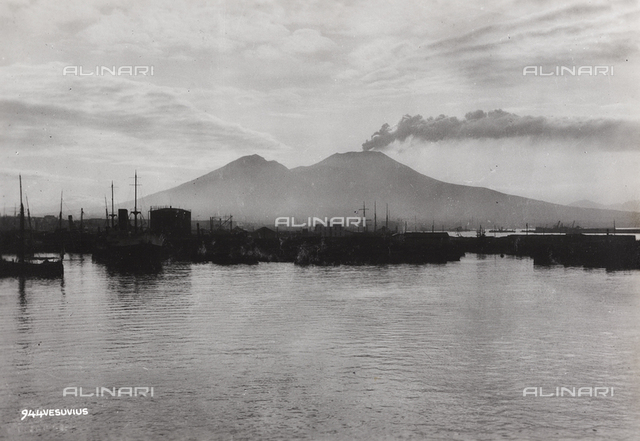 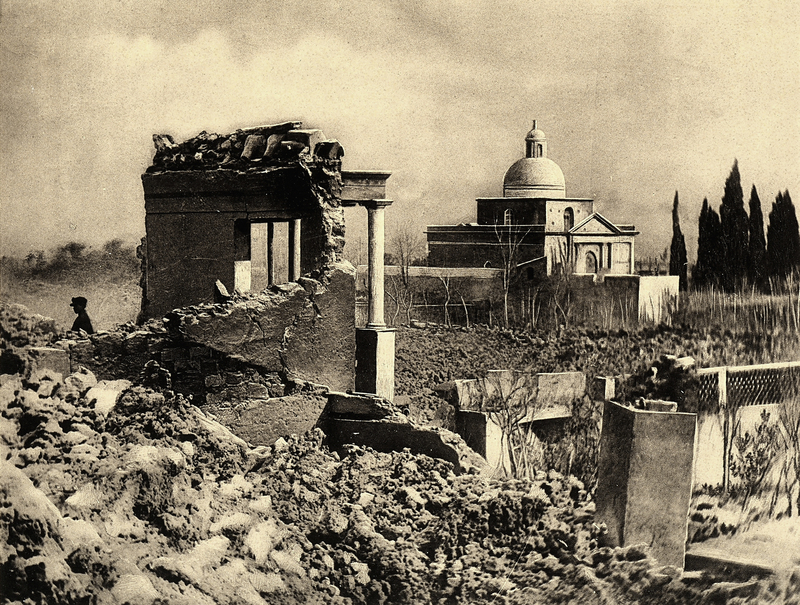 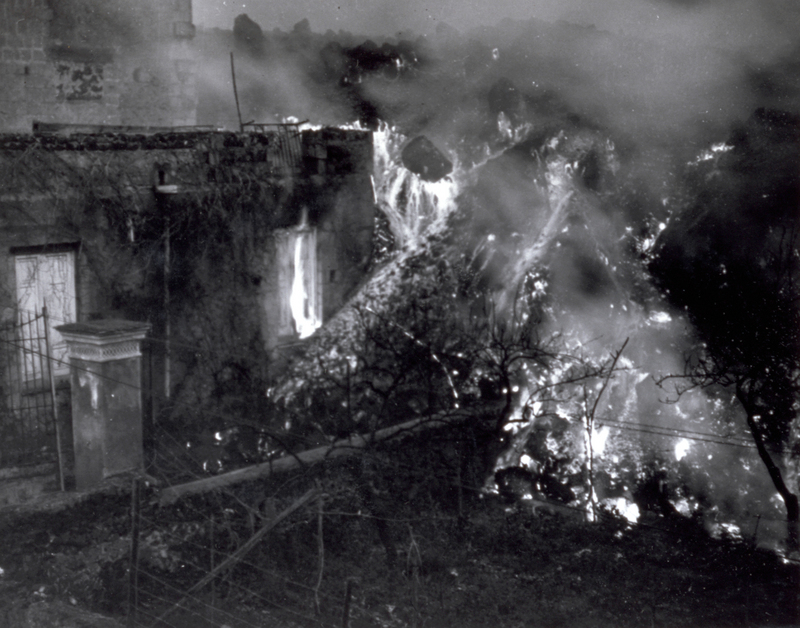 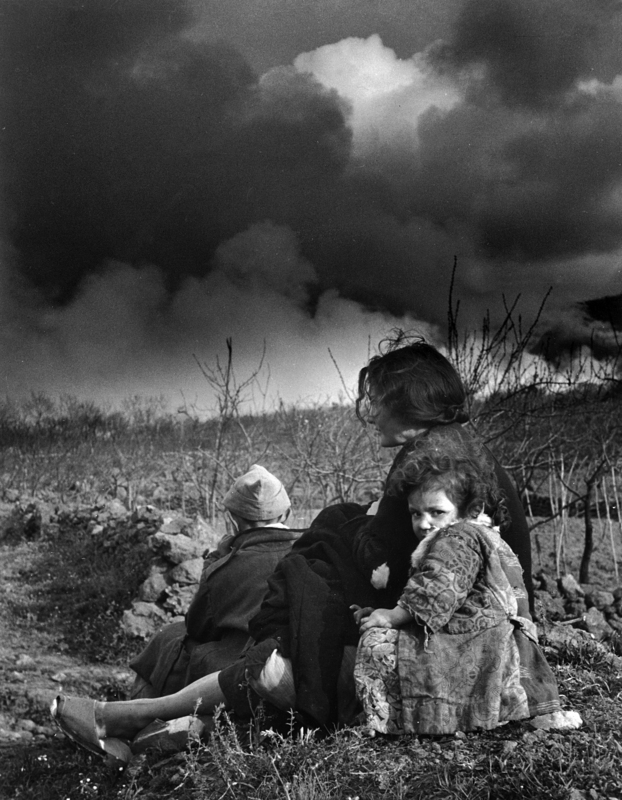 The plume of Vesuvius, for centuries a "must" in the drawings and stories by landscape painters and travellers, disappeared in 1944. During that spring, on top of the roar of war, came the explosions, earthquakes, ash showers and lava fountains until the main conduit closed due to collapses and accumulations of material and the mountain went into a 77-year sleep.

The devastating eruptions are the other side of the Vesuvian oleography and the terror of the people still living on its slopes. The 79 A.D. eruption froze Pompeii, Herculaneum and Stabia into an eternal cast: it was , according to volcanologists, a Plinian-type explosive phenomenon . It started a phase of activity that through a number of big eruptions - above all that of 1631 - lasted until the first half of the twentieth century.

The exhibition documents four moments in the last two centuries of the volcano's life. The 1872 eruption, when San Sebastiano and Massa di Somma were partially destroyed by lava; the 1895 “reawakening”, when the lava flows gave rise to a hill that was named after Umberto di Savoia; the 1906 eruption, the most destructive of the twentieth century, which invaded Boscotrecase, San Giuseppe, and Ottaviano and caused over two hundred victims.

Finally, the weeks of 1944, evoked by Curzio Malaparte in his novel La pelle (The skin) and still alive in the memories of the elderly locals. Then Vesuvius stood quiet . It has been silent since then but the people from the "Golfo" still worriedly scan its peak. 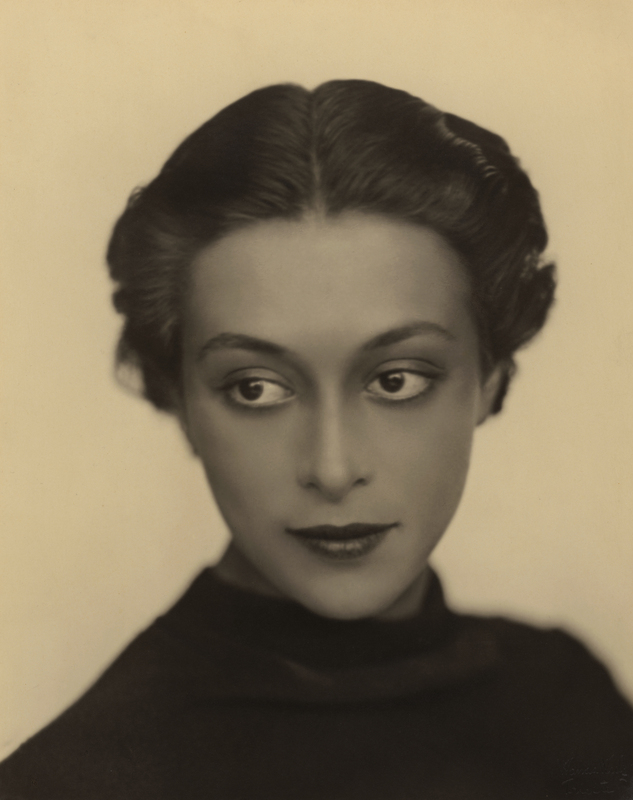 The gaze of women through the history of photography, from its origins to young contemporary artists. Valorization of the most important Italian Fund of unique photographs

The Alinari Foundation for Photography participated in the call for bids Strategia Fotografia 2020-Conservazione issued by Direzione Generale... 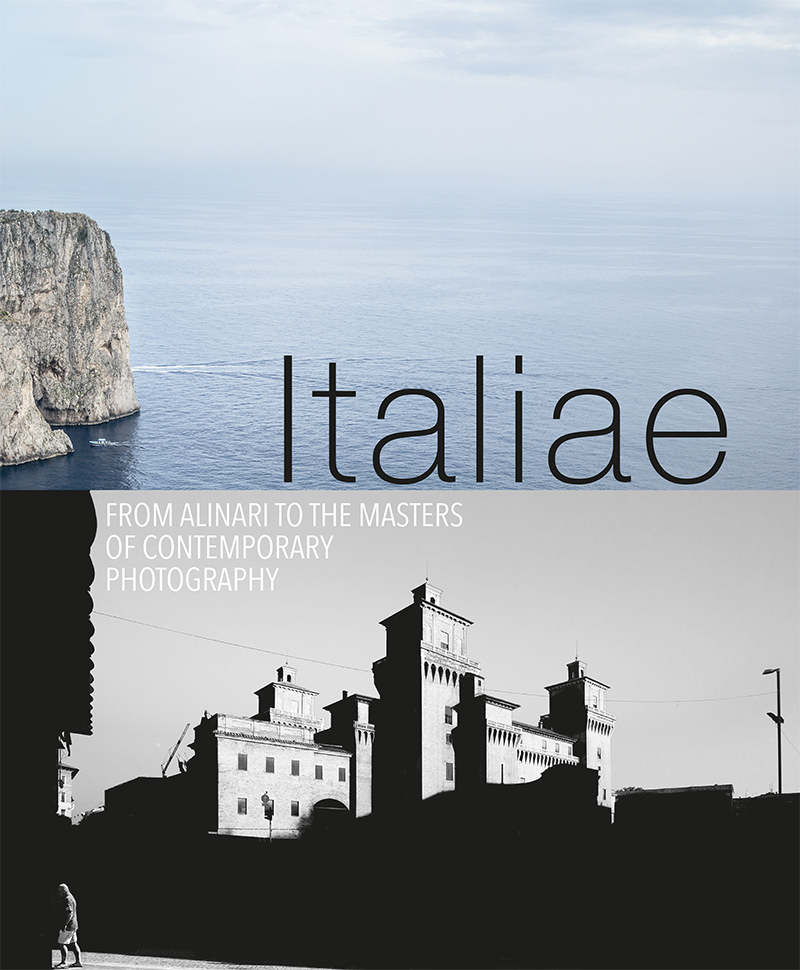 Italiae From Alinari to the masters of contemporary photography